The Jurassic World Live Tour made it’s way to Brooklyn, you know we had to check it out.

I can remember when I first saw Jurassic Park with my dad at a Bronx theater. It was one of those moments that I will never forget. The movie will forever go down as a classic to me because I spent that time with my father.

Fast forward to 2019 as we were invited to check out a behind the scenes event leading to Jurassic World Live Tour. You can read about it HERE, it was dope and to be honest, I had no idea how we would top it.

Then the email came, we were invited to check out Jurassic World Live Tour at the Barclays. It was on, Brooklyn we were coming.

They hooked us up big time as we sat in the 7th row, just a few feet from the action. They were awesome seats. I heard from various friends that no matter where they sat, it was a good view.

But if your kids love dinosaurs like mine do, if you can afford it, spring for closer seats. Especially the 5-10 seats they have on the actual floor. The dinosaurs come right up to you making that moment even more memorable.

From our location, we could feel the heat from the explosions and felt like we were part of the action. I lost my middle child to the show and I’m sure it would have happened no matter where we sat.

Is it Halloween dress up, or the real thing?

I know I know, we are adults, we know they aren’t real but how do the dinosaurs look?

They look real as hell! They did a great job designing the dinosaurs from the actual look, to how they move around in the arena. Even the famous dinosaurs like Blue, who are manned by humans look real. You see the human legs moving the dinosaur but after a while, you forget all about them. They did a great job camouflaging everything. This wasn’t a janky hand puppet performance at the park.

Jurassic World Live Tour paid real close attention to the details and the kids were all fooled. You could hear kids all over the arena screaming out the different types of dinosaurs and even the equipment the team used for the show.

My youngest couldn’t even sit on his own chair, he had to sit with mom because he was scared. He’s a tough guy but these dinosaurs had him shook lol.

The show lasts for about 2 hours with a quick 20-minute intermission in between. It happens right after about 30 mins of the show. The storyline was simple but effective!

As an adult, I would have loved a deeper storyline but it was perfect for the kids. They could follow along easily and even infer where the story might take them next.

They had motorcycles doing tricks during the fight scenes and used the whole arena to tell their story. They even had actors run up and down the aisles of the arena as they battled the good guys. My youngest went crazy when he saw them run past him.

My kids were on the edge of their seat all night and you could really tell that they were focused on the story. They didn’t care about food, the bathroom or even their cell phones.

They didn’t want to miss any of the action and that’s a great sign especially when shows like this can get costly.

The attention to detail, the storyline and the way they got the crowd to participate through dialog and more was pretty dope. They even had a big screen showing people’s Instagram posts while at the show.

We ended up being on the big screen, once again sealing my title of the best dad ever lol.

It’s the little things that matter but on this day, it was the huge dinosaurs that stole the show. I heard my youngest describe his experience and fear of a Trex weeks later at his daycare. Kids have short attention spans so when you see something like this happen you know it made an impact.

It’s definitely a Cool4Dads Certified Event, get your tickets HERE!

Your kids will thank you but you will also thank yourself. Your presence never has to be boring. Go live it up, I did and have Jurassic World Live Tour.  to thank! 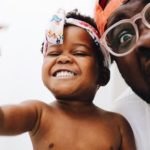