Beleaf In Fatherhood with Glen Henry

How strong is your Beleaf In Fatherhood? The homie Glen Henry is a believer and tells us why!

#DopeDads like us will never bet against fatherhood and to be honest, it makes many us a much better person than what we were before becoming fathers.

Fatherhood set me straight from the day I realized my wife was pregnant with my 1st child. I knew things were going to be different but I didn’t know how much it would change me for the best.

It put things in perspective and before becoming a dad I felt like I was living a regular life. I was all about my 9-5, my friends and living life to the fullest. I lived like life could end at any moment. However; that changed as soon as I saw my son’s head pop out.

That’s what fatherhood does if you let it! You learn how to fill the role of being a father without a blueprint and will respect your role like never before.

In this episode, Glen tells us how his Beleaf in Fatherhood movement went from having fun with his kids to a full-fledged business. He walks us through some of the trials and tribulations of getting his business running and how fatherhood influenced it.

We covered starting a business, why going viral sucks sometimes and my favorite, how to deal with others in your space. Many of us have started a business and have seen others go viral while we struggle to create things. It sucks!

Glen clearly defines why none of that matters and why you should also focus on the people you are trying to serve.

I call Glen Henry an OG in the game, he doesn’t think so, but the work he has done in such a short time makes him an OG in my eyes. Glen dropped gems for real and taught me so much about the hustle that I didn’t want it to end.

Real, raw and uncut, that’s the type of discussions I like having. Glen didn’t disappoint as we talked about how he is using his love of Hip Hop and family to speak directly to those that need it the most! US!

Listen in to step your game up and to hear one of the realest discussions on the business of fatherhood period below. 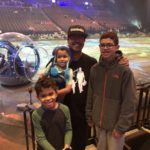