This was something my 12-year-old told me as we played video games together a few nights ago.

Where I’m from, I’m old, to my kids I’m old, but to me, I’m just getting started! I might live to 90 years old, you better believe I want to be there!

I really started to think about ageism in February as I sat in for a lunch with dads sponsored by AARP. We got to talk about ageism, what we learned about it and we also got share how we felt about it.

I’m down with #DadsDisruptAging here’s why!

Age is just a number until you feel it

The worst part about getting older is actually feeling the pain that comes with it.

Gone are the nights of partying all night with my friends. Getting up after a long night like that is brutal. As a mid 20-year-old, hangovers were part of life, oh and that feeling of soreness… Please, that was nothing, let’s do it again asap!

As a younger dad, I didn’t start feeling my age until my late 30’s. Now injuries take longer to heal and nights of 1-2 hours of sleep is no go. Yes, aging is real but what’s even more real, is figuring out how to still have fun with your kids without letting your age get in the way.

You still might feel sore after a day in the park, but you can do that In moderation until the wheels fall off. Age doesn’t stop you from doing things, what you feel after does.

Be mindful of what you can and can’t do so you can keep living it up with your kids at any age.

Aging doesn’t mean that you are DEAD! I hear dads say that they are too old to do things with their kids sometimes and I get it.

I’m a big kid at heart but I also know that there are some things I simply don’t want to do now that I’m older. But then there are childhood activities that I always wanted to try and never did until now.

I, like many other dads, get to live vicariously through my kids. I don’t just live through them though, I try to do the things I always wanted to do with them.

For example, we did a crazy game show a few months ago. When I told my older friends about it they told me, “dude you’re too old for that!” I even invited a few dads and they passed because they thought they were too old to have fun.

They weren’t laughing after we were picked to do the course and laughed all week about it. If you’re using your age as an excuse to not live it up, then you already lost.

I’m getting old, but my kids give me purpose

My dad would play basketball with me until I became a teenager. All his friends would sit on the park benches playing dominoes while he played with all of the kids.

He was an old man by our standards but was more active than most young dads. He always told me that playing with me, made him feel young. He always suffered from medical issues and would joke that his time might come sooner than later. Luckily for me, modern medication kept him with us!

Now as a dad myself, I know exactly what he meant. By playing with me or just simply being part of my everyday life, he had something to live for. Since he wanted to be there for me, he started to take his health more seriously and I’m doing the same thing now.

My kids make me feel young when I play with them and knowing that I can live past 70, 80, heck maybe 90 years old is enough motivation to take care of myself. As I got older, I started eating healthier, still, love me some fries. I started to do less reckless activities and really honed in on my relationship skills

Call me old, I still might run laps around you

My body tells me I’m getting older but my mind plays tricks on me.

My mind tells me I can do almost anything and everything that I put my mind to. To me, age really is just a number and if you start to call yourself old and play your own mind tricks on yourself, well guess what… you will feel old.

Instead of using my age as a distraction I use it as leverage. I know I can’t pull a quick cross over like Lebron on my son, but I do know I can still shoot over him since I’m taller.

As I get older, I know physically I am not the same, but it sure does feel the same. Maybe my mind is playing tricks on me and I’m grateful for it.

How do you feel when people especially your kids call you old? Do you let it stop you or use it as an advantage? Hit me up and fill me in!

This post is sponsored by the good folks over at AARP! They might have hooked me up, but the words, feeling and overall vibes are MY OWN! 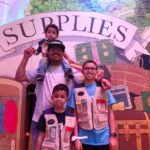 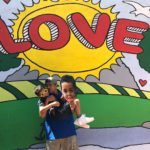