Living the life at #DoubleDareLive with your kids.

Growing up, I would sit in front of my tv dreaming that I could be on the show #DoubleDareLive!

I would sit there thinking to myself how lucky these families were to not only compete together but to be on one of the best shows on TV. I even thought only rich kids had the luxury of going to Double Dare.

When I found out they were doing a live tour called #DoubleDareLive I had to find a way to go there with my son. I know he loved the show and I wanted to relive my youth, plus we got a little extra cash now.

What I didn’t know was that we were about to enjoy one of the greatest moments of our lives.

Here’s how it went and why YOU should go! #DoubleDareLive is definitely a #Cool4Dads Certified event.

Fill your waivers, anyone can get picked to play 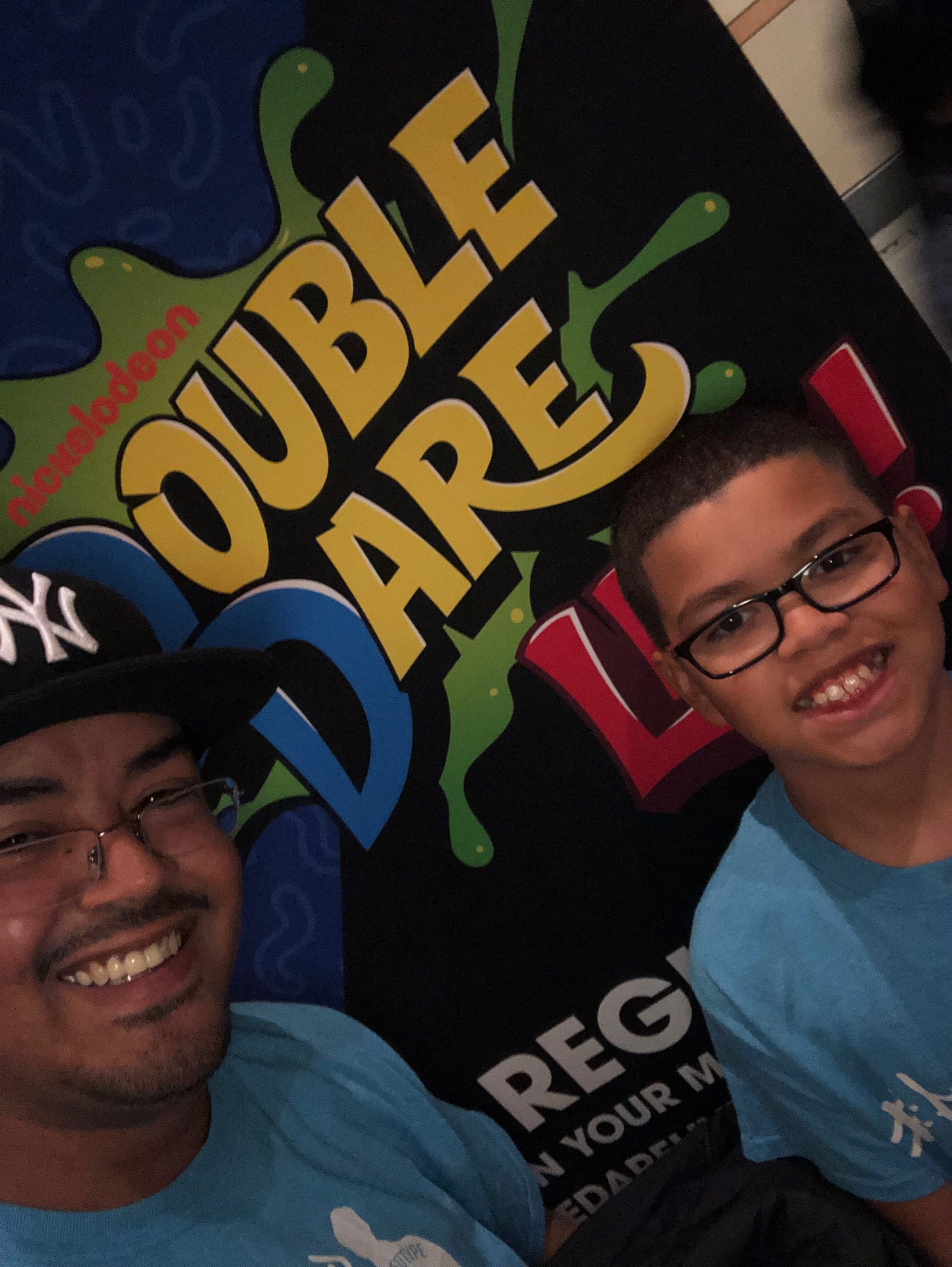 Weeks before the event I signed a waiver to be on the show. I didn’t think much about it, to be honest, I thought all game shows were rigged.

At 1st we didn’t even pick up our blue wristbands because we thought we had no chance of getting picked. We only picked them up because I wanted to take a photo with my son and saw a lady handing them out.

That was the best decision of the night but we didn’t know it until the end. Everyone in attendance that filled a waiver had a chance to get picked. It didn’t even matter if you had VIP passes, the best seats in the house or sitting in the upper deck like we were!

If you get picked, live it up, get messy! 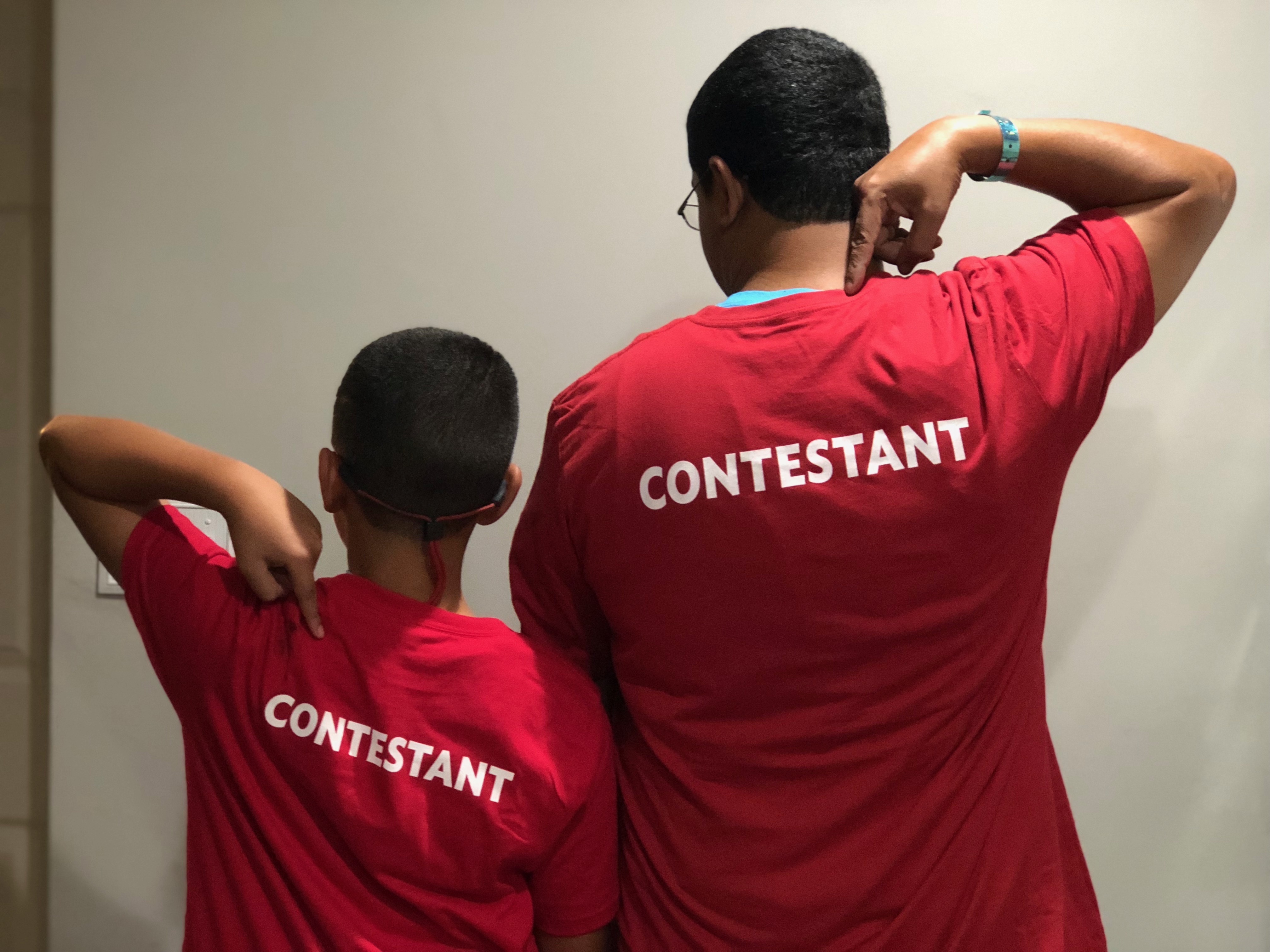 Our tier was the 1st tier that the staff of #DoubleDareLive attacked but we didn’t get picked immediately.

We saw 4 kids get picked, one of them was actually sitting at my old seat since they arrived late and we moved over for a better view.

Little man was livid, we were so close. For the next hour or so we saw kids and adults sitting in the orchestra area getting picked. Some even turned down the chance to be on the show while we begged and screamed to be on. My son turned over and said maybe next time we should get better seats lol.

Just when the show was coming to an end, it happened. We got picked to compete for a chance to represent the red team in the grand event, the obstacle course. I became that dad kids brag about with that one lol.

I didn’t know what they had in store for us, but I wasn’t giving up the chance to be on stage sharing dope memories with my son. It was time to live it up and forget about all the embarrassing things that could happen. I was down to get messy, nothing was stopping me.

Remember why you are at #DoubleDareLive, it’s about kids. 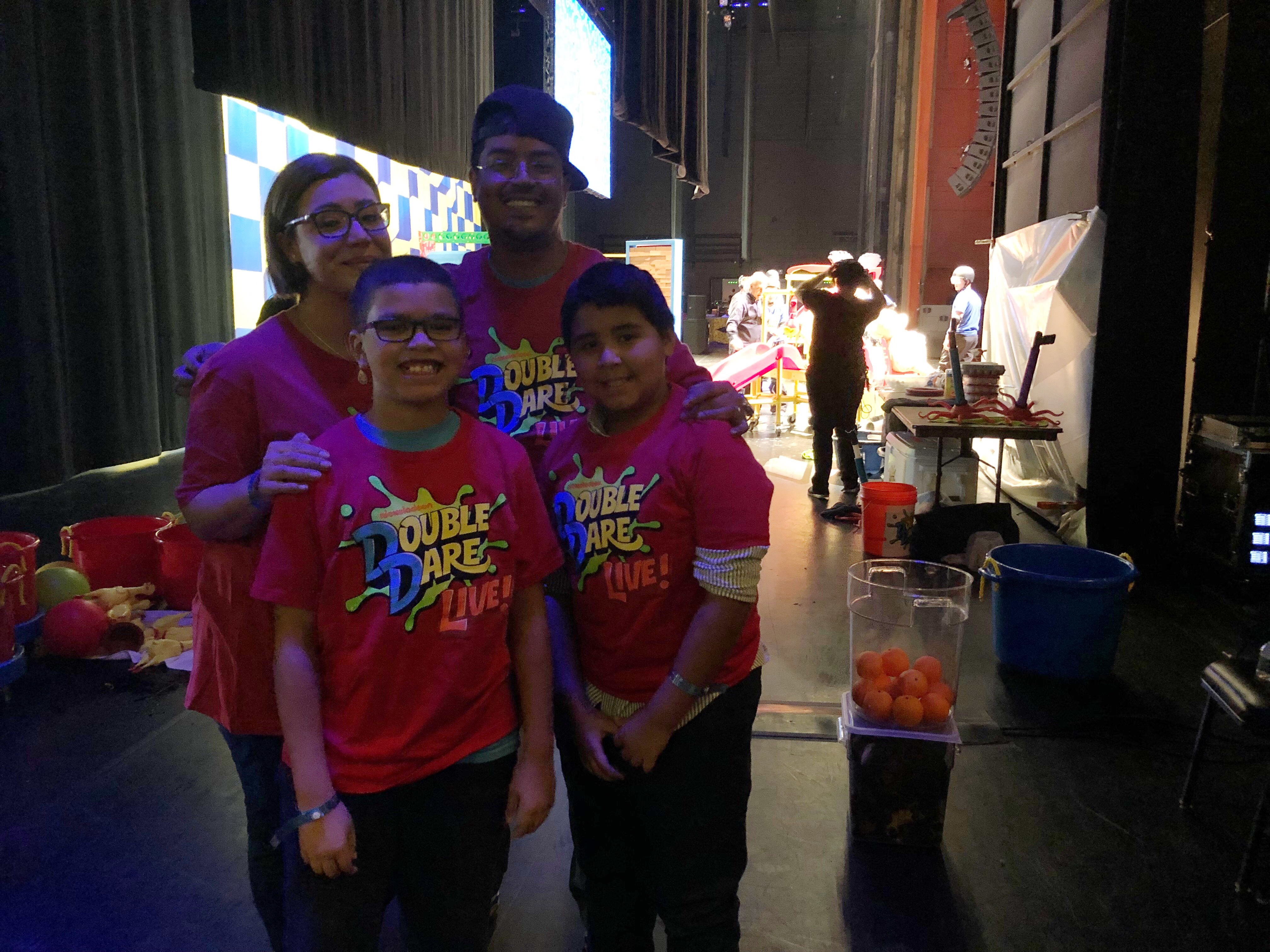 As we competed during the trivia portion of #DoubleDareLive, all I kept thinking about was winning so we could do the obstacle course. My son wanted the money, I just wanted to pick slime from a model nose they had. It’s the little things!

There were times when the other parent or even myself could have taken over and won everything. We could have cheated but instead, we let the kids handle mostly everything.

We were living a childhood dream but now those dreams belonged to our kids. They were living it up and we were living vicariously through them. We lost and didn’t make it to the obstacle course for the money but our kids won big! They felt like stars! 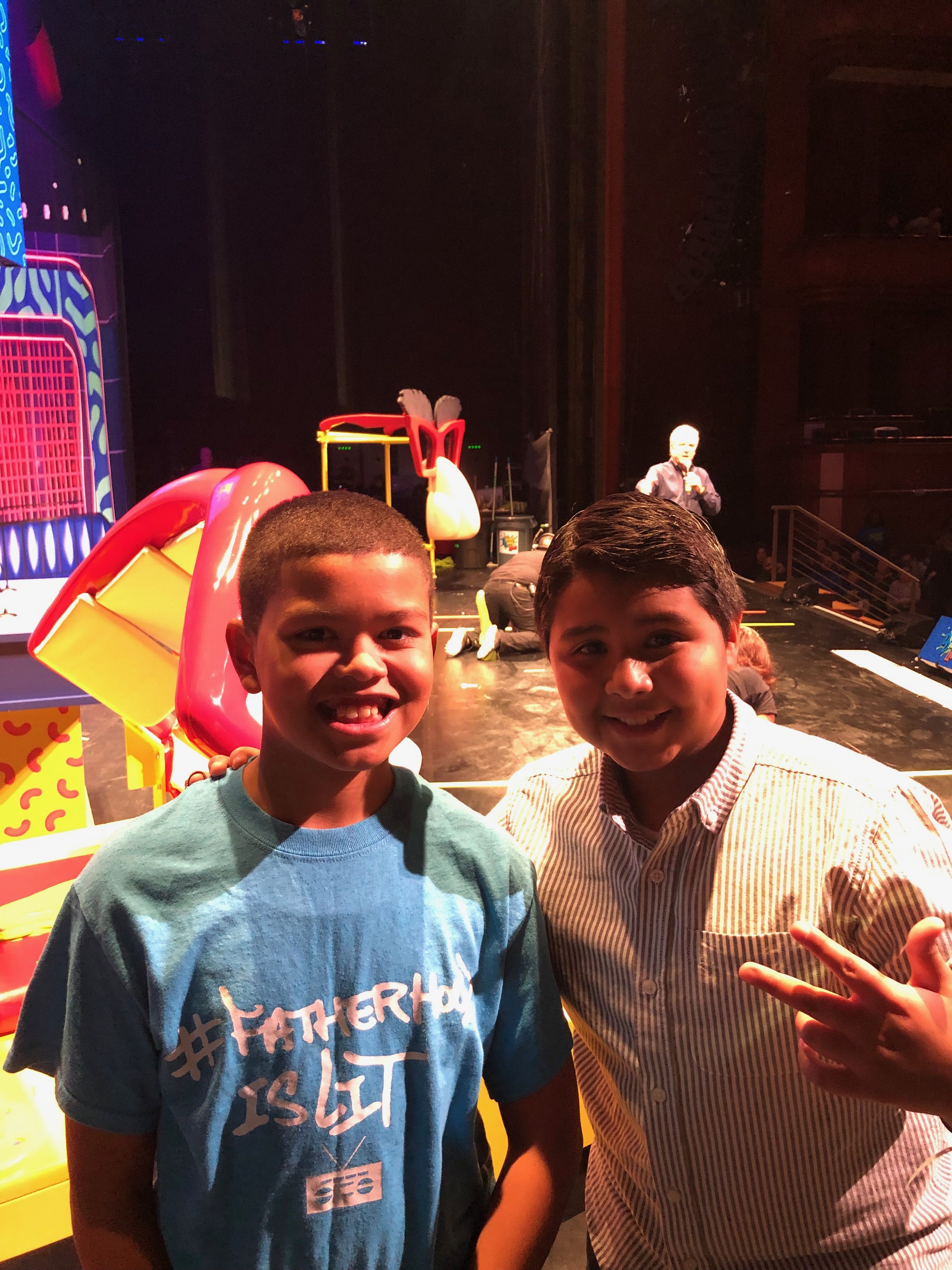 That was a huge win in my book. Seeing my son’s smile and excitement completed me like no other. It was the kids night and we were proud to win or lose at their hands. remember why you are there!

If they come to your city, you have to be there! 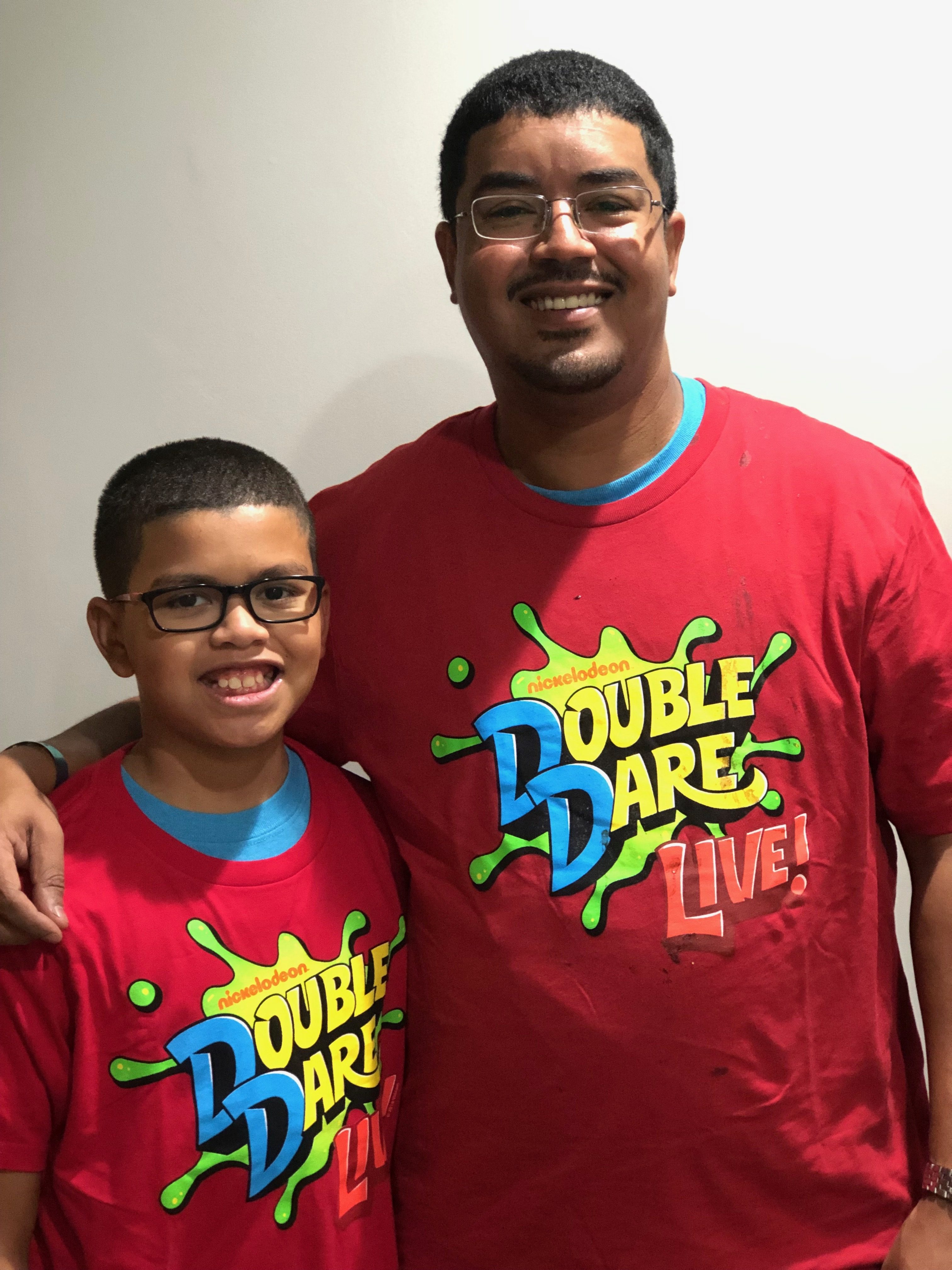 Besides being affordable, this event was truly for the whole family. Random kids and even adults were chosen to do random games for almost 2 hours.

It got really messy, but the parents and kids were having a blast. Even the people that didn’t get picked had fun because the energy in the building is so infectious. You start cheering for total strangers as they get messy and silly!

That part alone was worth the money spent. We didn’t win the $1000 dollars but we won regardless. Everyone made sure to let us know, and my son will never forget this moment. He even wore his dirty contestant shirt to school the next day!

I didn’t even have to Double Dare him too lol! Ahh that #PresenceOverPresents life is something else!

Ever been on a game show, was it cool for dads? Hit me up! 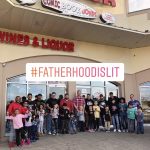 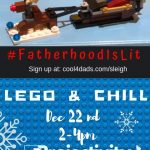