Mario Armstrong believes we should never settle for less, but how do we teach our kids that?

We as parents want the best for our kids!

We also know that getting the best means you have to deal with many trials and tribulations. It doesn’t come easy at times and this is something we need to reiterate every day as our kids grow.

However; does that mean you have to be that annoying dad and force these lessons down their throat or is there a better way?

It starts with us

As I continue to talk to dads from all walks of life, the notion that it starts with us continuously gets thrown around these conversations, and rightfully so.

When you are present in your kids’ lives, even if you share custody of your child, they will learn way more from your actions than from what you say.

We are superheroes, kids know that and will emulate our actions. Don’t believe me, think about the annoying things you do, do they do them to you sometimes?

Do you look at them and say, man, I would have done the same thing? LOL. Yeah about that, sometimes they imitate the great stuff we do but other times, those annoying traits might be from us.

If we settle, they will settle! That’s just a fact and Mario Armstrong knows this. He won’t settle for anything less than what he feels he is owed and won’t stop until he gets it.

That’s how you lead by example and it starts with your own actions. How you handle settling and going the extra mile.

But your kids don’t have to be Mario or YOU!

That’s right, just because we lead them, that doesn’t mean they have to be exactly like us. They can be better than us without doing things exactly like us or doing the things we ultimately do!

When we push our kids sometimes we say lines like, “I made it in technology, why don’t you do the same?” We hold them to a standard that they might not ever achieve.

They can’t be us, they have to be them

As I chatted with Mario Armstrong, I thought about his 2 Emmy awards and what it took to get there. When I 1st met Mario he was on the grind. He showed an audience of about 100 people and myself an ATM statement that had a balance of about $2.

Everything he said he was going to do, he did, and more. Mario went from struggling to make a dollar to success. Can you imagine the pressure his son might have to be better than him?

Mario Armstrong on the #FatherhoodIsLit podcast

That pressure that I felt his son might have was the reason I asked Mario Armstrong to come on the show.

Sometimes we dads push our kids to be just like us, not Mario! Instead of forcing a life on his son, he sticks to his mantra of never settling.

His son wanted to be a musician, not an Emmy award winner, Mario found ways to help him achieve those dreams. Not once did he impose his dreams on his son, instead he imposed his work ethic and belief that anything we put our sights on can be achieved.

This week Mario Armstong and I talked about the pressures of succeeding in regards to our kids, how teaching them never to settle isn’t always easy but it starts with our actions and much more. My favorite part was making sure that your kids know they can be what they want to be, not what you became!

You know the motto, we learn from dads that are doing it and Mario Armstrong didn’t let us down. I can’t wait to watch his son perform on the big stage one day and I know he will make it.

How do I know? Well, he has a father like Mario Armstrong and if I know anything about Mario, it’s that he will do anything to help his child succeed. He won’t settle for anything less, and neither should we!

To support Mario Armstrong check out his site HERE!

Mario knows how to get those sponsorships, if you are looking for some money, check out his new master class HERE

Follow Mario Armstrong for daily gems on his IG HERE

Hear more on Episode 84 below or on all major platforms like APPLE, SPOTIFY, and STITCHER. 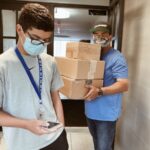 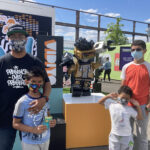