Rob Markman has been making moves in Hip Hop and now he’s handling business as a FATHER!

Rob is one of the guys that is highly respected in Hip Hop. From his early work as an XXL writer to working with Sway In Morning to now leading as an executive at Genius.com. He has done it all and has even released an album titled Write To Dream which showcases his lyrical skills.

When he gets involved, he goes all in and I wanted to chat with him about how he goes hard as a FATHER. When you’re working that hard, things take a hit, Rob proved it should never be family taking the hit!

Rob broke down how his dad worked two jobs and still made his presence felt. Even though he was gone for most of the day and night handling business, his dad would still make sure to be there for them. He even said that it took them a long time to realize their dad had a second job.

That level of being present is something that always stayed with Rob while he rose in the ranks of Hip Hop journalism and the endless work that comes with it.

His dad taught him that he could grind and still be there for his family. While talking to Rob, you could tell that the apple didn’t fall far from the tree. He wasn’t going to let his grind stop him from being there for his kids.

Rob is the type of person that needs to be busy, he even said he gets in trouble when he has nothing to do. So I wanted to know how he keeps himself busy with the kids.

Not only does he show up for his kids, but he also involves them in the things he loves like Hip Hop! He broke down going to concerts with his son and how he got him into a Wiz Khalifa concert while young. You know I had to ask him how he pulled that off!

I took my son to a festival once which was cool but can’t wait to take him to a real Hip Hop concert. Rob told us how he does it and to my surprise, he’s not backstage with his kids all the time. They get the full experience by being in the crowd!

Talk about keeping it humble! I love hearing from dads like Rob Markman and he didn’t let me down. We talked about being a Hip Hop dad and so much more!

Listen below to find out how a DAD doing big things in Hip Hop takes his presence seriously and makes it felt! Salutes to Rob Markman for hooking us up!

Listen to Episode 50 below or on all major platforms like APPLE, SPOTIFY, and STITCHER to find out how Dads like us survive recording videos with our kids 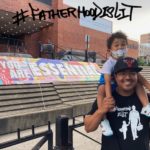