Sleep, What Is That? I Have Kids

Before having kids, sleep was never an issue!

Now finding time to actually get a good night of rest is basically impossible and my 1 year old reminded me that even when you are sick, sleep barely happens!

I was super sick once and my son was tossing and turning all night keeping me up. I might have got a solid 2 hours of broken sleep and then whammmmmm…

He woke up on my bed hurling all over me while I sought safety under my covers. Talk about a mean wake up call!

That was all I needed to top a horrible night of sleep. Heck, I haven’t had a great night of sleep in years unless you count 4 straight hours of sleep as a success. Real dads know that feeling oh to well!

Ahhh yes, the part of dad life no one talks about or act like it’s no big deal! But it is a big deal, lack of sleep can destroy your body and mind. Well, at least mines!

My dad was an army dad and I swear he slept with one eye opened at all times.

He would always be there for me and would catch me when I would try to be sneaky while he slept. Homeboy had skills and now I’m the one sleeping with one eye open. Man does it suck!

I love being there for my kids, but now I wake up for slightest of noise coming from them. It feels like I’m daydreaming most nights. Not fully asleep but also not really awake.

That shit sucks, I wish I could clap my hand and just fall asleep. That would be a dope superpower. Instead, I lay in bed most nights wishing I was a heavy sleeper.

Why Did I Do This To Myself 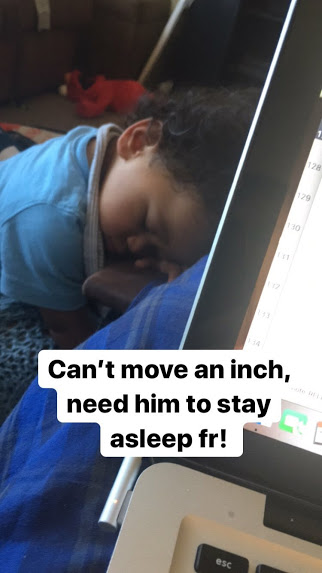 My 1 year old sleeps with us and I’m starting to get my eviction papers in order.

That little mofo loves to put his cold feet on my warm body while I sleep and hates blankets. Sounds familiar?? Wifey isn’t much better lol.

He also has this thing where he HAS to help us form a living letter H on our bed. Meaning his head is on my stomach or back, while his cold feet are attached to his mother.

I have no idea how she sleeps, but I do know there are nights where I have to rough his behind up.

Tossing him from my side of the bed to his pillow like I’m the hulk with crust all over my eyes. Oh and let’s not forget the bad words I “accidentally” call him while doing so.

Judge me if you want, I’m just being honest, plus I think he does it on purpose.

Life Wouldn’t Be The Same Without Them!!! 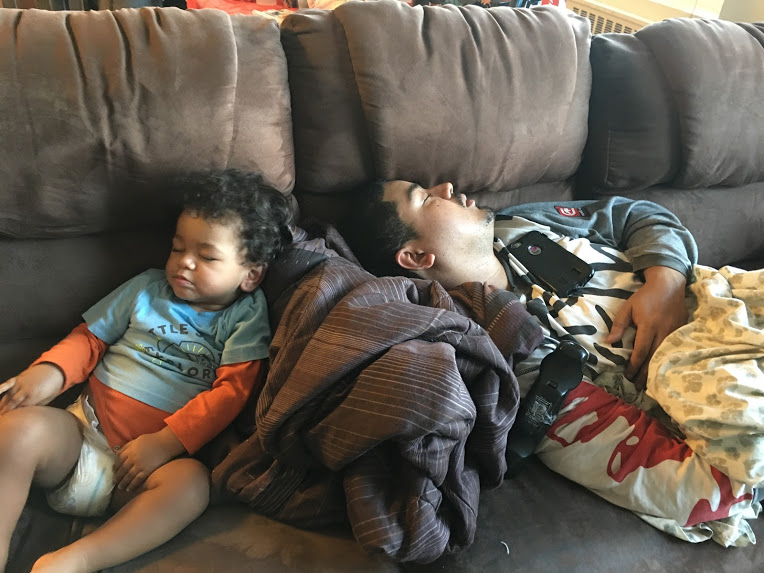 I know the easy fix for my 1-year-old is to kick him out of my room. However that’s not a real solid option for us, life is just easier with him there at the time.

We don’t have to walk to his room and trip on one of the 1000 toys his brothers leave around. Those Lego Bricks hurt like no other toy.

There are many more reasons but the main reason is that we are lazy. That laziness comes with a price, sleep doesn’t exist like we wish it did.

Even if we kick him out we would still have to deal with his older brothers. Their excuses for waking us up are a little more original like the random nose bleed or bathroom accident.

But sometimes they are just as annoying as their little brother. Like when they need a cup of water but never had an issue getting it from the refrigerator before.

Or when suddenly their favorite toys become monsters and now they are scared or faking it, I just don’t know sometimes lol.

Oh and that motto of sleeping when they sleep, yeah that’s an urban legend for real!

The honest truth, sometimes I question why we deal with it!

Why after giving birth to the 1st dream killer did we have 2 more?

Are we freaking nuts or is the pullout game super weak???

They take away our sleep, hurl on everything, make a mess of everything, but they are a blessing I would take over anything any day of the week.

Give me all the craziness that makes parenting suck, I love being a dad and will eat those issues up but will complain about it just like the rest of the dope dads out there!

Sometimes I even sit there and just ask myself, can I get one more hour of sleep?

Chances are it won’t happen but one can dream, oh wait they kill those almost every night!!!!

Ahh the life, it isn’t always easy but its a blessing to be living it!

How do you get some extra hours of sleep? Hook a brother up! 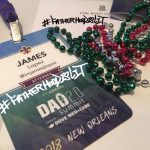