Teaching your kids to defend themselves with Mike Roman

How do you teach your children to defend themselves, is it even needed?

Where I come from, you can catch kids of all ages slap boxing or tussling with friends.

In the hood, it was the norm and that’s how many of us got our hand skills.

Now as an adult with kids, I look back at my upbringing and realize that our KIDS have it way harder than we do.

Violence is at a high all over the world and dads like us, well dads like us worry about how our kids survive the craziness especially with the internet around!

We teach them to defend themselves!

Talking about defending yourself is one thing, teaching them how to defend themselves is a whole other topic.

In true #FatherhoodIsLit fashion, I wanted to talk to another dad about this topic since it’s one that has so many moving parts to it.

The homie Mike Roman founder of the famous Rumble In The Bronx stepped up to the plate to have this discussion with me and killed it!

Mike started Rumble In The Bronx to stop the gun violence that has been destroying our communities. While politicians talked about it, Mike got people to put the guns down and square up for a good old fashion boxing match.

He’s been able to get people that hate each other to rumble and then show each other respect because they handled their business with their fists instead of losing their life.

What if I’m not about that life?

When I wrote about dealing with bullies for the community, many fathers hit me up praising the realness of the article. You can read it here!

However; I also received tons of messages from dads who didn’t know how to defend themselves or simply weren’t too fond of doing so.

I wasn’t sure how I was going to teach my kids toughness, so I paid for them to join an MMA class. Eventually, our crew hosted a few FATHER/CHILD boxing sessions with Crunch Gym to help out even more!

Mike Roman came through and kept it real with the squad as expected!

One line that really hit home was when he said, “talking about it is the first step, go do it!” That’s how a real father gets down! We don’t have all the answers but that won’t stop us from doing what our kids need.

We had a really dope conversation about:

Hear more on Episode 91 below or on all major platforms like APPLE, SPOTIFY, and STITCHER. 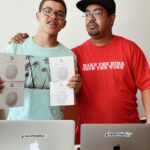