Flip The Script with Jason Wallace

The world seems to appreciate dads more and more now but the image they have of one can be misleading. It is an image that we dads have carried with us for centuries, one of a hunter and one of doing whatever it takes to support the family!

But is there more to us? There sure is I even spoke about it on Good Morning America and The Tamron Hall Show.

This week I got to talk about the #FlipTheScript movement that was birthed in DC with Jason Wallace.

When I first met Jason Wallace, he didn’t tell me that he was the Executive Director of the Commission on Fathers, Men and Boys at the DC Mayors Office.

Instead, he led with his campaign called #FlipTheScript. He was looking for dad communities like ours to push the message but also participate.

The premise was to have men all over the country showing the world how they flip the script and add value to kids’ lives. They did so by posting huge images on buses, trains and anywhere that people walked by. DC was plastered with images of dope dads handling their business.

That’s a mission I can support and loved watching it all unfold.

As I posted pics with my kids and tagged it with #FlipTheScript I kept thinking about all the ways my dad made his presence felt.

He led the way and now it was my turn to build on that foundation. I was lucky, my dad accepted his role as a father and really made an impact on my life.

I could tell Jason Wallace was the same way. He wasn’t the typical politician saying the right things. He is a man that believes in making an impact and I learned this throughout our conversations at Dad 2.0 Summit.

Jason Wallace is one of those people that we have to support and protect because knowing him, he might be one of the few politicians in the world that truly fights for DADS in a major way.

Just like a #RealDad, he doesn’t mind getting dirty in order to make his presence felt. Don’t let the suit fool you, he’s one of us!

Politics isn’t my thing but I’m glad we have someone like Jason Wallace representing for us. You should be too!

Listen to Episode 38 below to find out how Jason is Flipping The Script in the political world and as a FATHER. 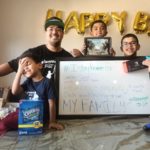